Is the Chromecast an Apple TV replacement in the classroom?

A few teachers and ICT technicians have been asking me about the potential of the Chromecast in the classroom. So I bought one and ran some tests. Purely educational tests.

The Chromecast does work with the iPad, kind of. But only with a handful of streaming video/TV content type apps.

This review is for teachers who are familiar with the impact an Apple TV can have in the classroom and understand what a game changer it has been for teachers and students.

If you want to know how an Apple TV can impact on your classroom, click here.

Below I’m using an Apple TV connected to a projector, in a school hall, mirroring everything I’m doing on my iPad. The Apple TV and iPad are connected to the same wifi network. 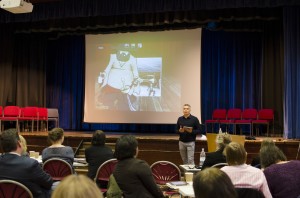 The Chromecast is small, very small and cheap – £30, a third of the price of an Apple TV, it also has no remote! Which at first I thought was fantastic, but soon began to realise the security implications of a no-remote set up.

There are a few apps from the Apple iOS App store, which have recently incorporated Chromecast; BBC iPlayer, Netflicks, Youtube, HBO, essentially TV streaming services. Which is fine for home use, but not a classroom game changer.

For the Chromcast at present, there are a few paid for apps, which allow you to mirror photos and certain video file types from your iPad, but you have to add the video recording to another app and wait for it to convert the file. Fun for the Geek, not for the teacher. We should expect to be able to show the video we recorded instantly, not have to wait for a conversion, thats’ old school!

Waiting for a video to convert, doesn’t happen with the Apple TV. The ATV mirrors everything you’re doing, regardless of the app, video or photo.

This is early days in the life of the Chomecast and it seems that on both tablet platforms, iOS and Android you would have to invest in certain apps that are Chromecast compatible, or wait for the app developer to incorporate Chromcast functionality into their app. With an iPad coupled to an Apple TV, all the Apps work, because Airplay is part of the iOS (Operating System)

But most relevant and alarming was, I couldn’t see a security option in the Chromecast settings! So any mobile tablet or smart phone device allowed onto my network, could hijack my screen/board. Acceptable for home use, not ideal for a school.

The Apple TV has two main options for adding a passcode, to prevent others from hijacking your screen, this is where a remote comes in handy, for setting security options.

There was also a considerable amount of video lag when using the Chromecast, compared to the Apple TV on the same network.

To conclude, the Apple TV is more secure, works with all iOS apps and content and is an easier method for wireless mirroring an iPad or iPhone in a classroom environment.
The Chromecast works ok with a host of TV services, and is a suitable setup for the home, but its not yet ready for the classroom. However it is small, so very, very small.

UPDATE. with iOS8 (Apples newest operating system for the iPad) due for release in the Autumn. You will be able to connect an iPad to an Apple TV using Bluetooth. Apple have called this; “Peer-to-peer AirPlay discovery and playback”

This new development makes the setup and user experience for both teachers and technicians easy and quick.